Abet Laminati and its design curators Giulio Iacchetti and Matteo Ragni celebrate the forty years of Memphis with a collective research project. The main topic: rediscovering the meaning of being radical nowadays. On display at the ADI Design Museum during Fuorisalone 2021.

In 1981, Memphis – the movement of thought, project and action founded by Ettore Sottsass to propose alternatives to the „modernist dictatorship” – brought a new radicalism in the design world. It did it drawing on daring, ironic and provocative imagination and creating a language made up of suggestions from art deco, pop art, kitsch and futurist aesthetics which it subsequently translated into furniture and objects. The material protagonist of this revolution was Abet laminate, a material considered poor, to which Memphis gave a new and absolute dignity, transforming it into the skin of a revolutionary design, able to dialogue with art.

In this year, characterised by nostalgic operations and literal reuse of the Memphis language, (today more relevant by the pervasive passion for vintage), Abet design curators – Giulio Iacchetti and Matteo Ragni – have decided to celebrate the fortieth anniversary of the movement’s birth by focusing not on the aesthetic output of the movement, but on the motivations that led it to exist, in order to grasp signs of its relevance contemporaneity.

Today, celebrating Memphis really means asking ourselves how Memphis design would look if Ettore Sottsass Jr and his associates had founded the movement today, forty years later? How would they have given substance to the radicalism that distinguished the group during its six years of activity from 1981 to 1987?

This was the starting point for the two Abet design curators who created SuperSuperfici, a collective workshop involving eight designers – Federico Angi, Zanellato Bortotto, Agustina Bottoni, Antonio de Marco, Chiara Moreschi, Martinelli Venezia, Panter & Tourron and Mario Scairato – committed to reinterpreting the radical nature of Memphis in a contemporary key, not by designing furniture or objects in the Memphis way trying to generate new design but by borrowing the same revolutionary inspiration from the movement.

The projects will be on display at the ADI Design Museum (from 4th to 24th September): an exceptional space, a dynamic museum intended to tell the story of Italian design.

SuperSuperfici, which started in November 2020, is therefore:

– A workshop in which the eight designers, under the artistic direction of Iacchetti and Ragni, started from the Memphis roots to study how to be radical with laminate forty years later.

– A digital format broadcast on Abet’s Instagram profile, with the eight studios involved telling the inspiration, concept and realisation of their respective projects.

– A collection of objects and furnishings that translates the brief of the workshop, demonstrating the vitality and contemporaneity of laminate and the vast range of surfaces produced by Abet, as demonstrated by Abet World in Bra.  This showroom with a sample room containing over 500 surfaces and decorative motifs is an abacus of design signed by the protagonists of the world of design from all eras and origins.

The workshop was curated by Iacchetti and Ragni, the visual identity is by Leonardo Sonnoli. 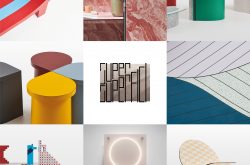